The Rail component does not have its own Inspector UI, but is editable through the Rail Manager UI: 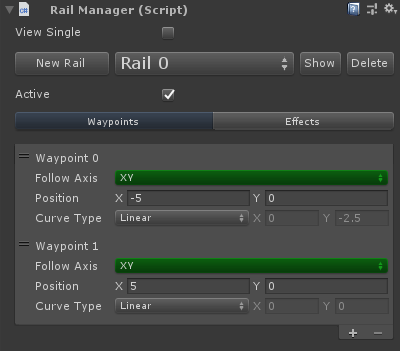 When a Rail is selected in the Rail Manager, the following controls are displayed:

When the Waypoints tab is active, each Waypoint is listed with the following:

When the Effects tab is active, each Effect is listed with the following:

Railcam 2D has an intuitive Scene UI, making it easy to edit Rails without having to use the Inspector:

Hold the Left Control key (Command ⌘ key on Mac) to turn on Grid Snap which can be used when positioning and creating Waypoints. The Grid Snap value can be changed in Settings.

The traingular markers are read-only and show an Effect's position.